With the Club Championship decided ahead of the last event, (congratulations, Laurie) the silver and bronze medals were up for grabs.  And grabbed they were - congratulations, Donald and Paul. Here is Alastair's report:

Black Loch 18 September. 9 of us turned up for the final competition of the season. Some regulars missing for various reasons and Laurie and Willie taking part in the Nationals. We were to find out later in the day that both had done really well. Our five boats set off to various parts of the Loch. With scarcely any wind , gentle drifting was the order of the day. The morning was fairly cool which presaged a warm afternoon to come. The fish appeared to be near to the surface with rises apparent.  We all came ashore for lunch and chat about tactics and success or lack of it. Some nice whisky was sampled and thanks again to Gordon and to the late Sydney!  Members were using various methods, intermediates, floaters and sink tips. Boobies , cut cats , crunchers, diawl Bachs and members of the “ hog “ family getting a mention. At weigh in at 4.30 Donald came first, Gordon a very close second and Paul third. Everyone else except your reporter recorded fish caught including Robert’s guest. A good day overall.  Looking forward to next season. I will sort out the whole trophy situation over the coming months and hope to have a regular AGM and dinner. Fingers crossed. Stay safe all !

The full results were:

Congratulations to all anglers in what has been a very difficult season for many.
​

Thanks to Alastair for this report:
What a glorious day the weather gods delivered. Frandy and surrounding area were a stunning example of our beautiful country. 8 turned up to fish, including a guest of Willie , Iain Bell. We would have been 9 but Donald S had to call off almost literally at last moment. Two wives were there to provide support but did not fish. Members tried a range of tactics; traditional flies, buzzers, cormorants and wotsits beneath a bung or fab. The breeze toyed with us all day, coming and going The dry fly also featured in the afternoon, following lunch ashore. Overall winner on the day was Iain, Willie’s guest. Well done. Laurie topped the members present very closely followed by Willie. Bob Ricketts, Paul Jimmy K and your reporter who avoided a red face not entirely caused by the sun! The two wives went on a 7 mile hike and were last seen sprawled on a grassy bank apparently “ out for the count” All in all a good day.  The full results are:

14 B&B anglers braved a very chilly day on the Lake and, as ever, those who got right on the day were rewarded with great sport.  I don't recall ever seeing so much bird life over the water - the air was thick with swallow or sand martin type birds - my skills don't run to a positive identification.  They were obviously gorging on hatching flies and the bright anglers in the club sussed that fish wanted straight line buzzers - you can look at the results to see who I mean!  I suspect that the cold numbed the brains (and other parts of the body!) of some of us and so there was no consistency of catch on Saturday.  W welcomed Donald to his first outing as a member and he took top honours in the top boat - a tremendous day for him and BP Paul.  Laurie and Bill did well too, arriving late and departing early - sorry I didn't see you, gents.  Bobby took 3 on very natural looking flies, persevering after a quiet morning.  Almost all of us gathered at lunchtime to remember Sydney with a wee dram of JW Green Label - his favourite whisky.  He will be missed.  There seemed to be plenty of fish at Lochend and round towards the Butts, but I din't hear pf any other other areas scoring heavily.  Sandy Bay needs  decent blow into it to clear the debris from the trees. and I saw only sporadic action in Gateside Bay.  The full results are as follows:

Willie and Tom were unlucky as their fish didn't quite get them into the points, while Jimmy and Robert had relaxed days.  in total we had 40 fish (22 taken and 1§8 returned), giving a rod average of 2.85 and these fish weighed a total of 95lb (returned fish 2lb each), giving an average weight 2lb 6 oz.  This was decent (delayed) start to the season for the club and we move on to Frandy at the end of the month in good heart.  Thanks to Paul/Donald for the picture below. 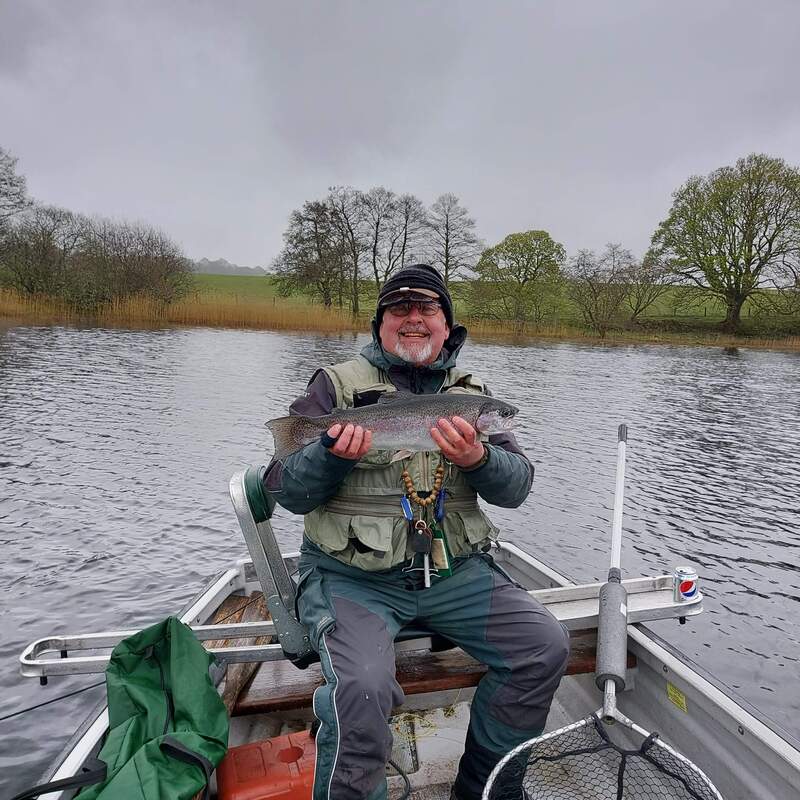