Barrie wins by 2.5 points from Ian G, with Laurie another 2 behind.  Paul and Robin were joint 4th, 10.5 points behind Barrie.  The full standings are here.

Detailed breakdown for the results are on the Meetings and Documents Page.  For this you need the password as full names are used - email me.

Loch Leven was wild!  10 anglers braved the very strong wind and it seemed that those who were the bravest got the fish.  We were shown how to do it by Leven specialist Alan Smith who (fishing privately) allowed his boat to drift into the very stormy water and, retrieving at light speed, landed 5 keepable brown trout and a host of small fish.  Of the B&B anglers, very few of us were successful with only Robin and Paul weighing in.  Tam moaned a lot about wee fish and losing them.  There's no doubt that there is a decent head of decent fish in the Big Loch at the moment, so let's hope that continues and that B&B anglers find out how to catch them!  Well done to Robin and Paul.

Robin's fish is pictured below: 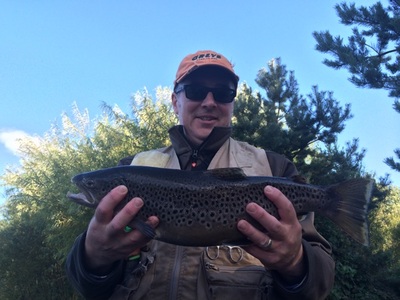 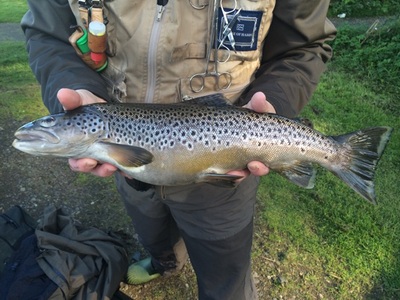 The fourth competition of the season was held on the Lake in excellent conditions on 8th May.

A warm day with variable cloud cover and a gentle to moderate westerly was forecast and after the wind got up, for once that is what we got. Due to unforeseen circumstances there was a call off resulting in 17 anglers competing on the day and our scribe going out on his own. Paul, who had qualified for the semi-final of the national on Tuesday at the lake, was pretty confident we would get plenty of fish on the “static buzzer”. The boats were initially split between the butts, tods hole and into lochend with a few going to Sam's point and reedy bay. The fish in the butts were getting tricky with only the occasional one getting caught early on (Sydney’s rod was seen bending to one on the buzzer). The boats at Sam's point and reedy bay were catching steadily all morning with a few large fish included (see photos). In addition to Robin's 6lb 12oz fish Ian weighed one in over the 5lb mark and others reported of returning big fish or being broken.

Best method was the floating line with a booby or fab on the point and size 12 buzzers on the droppers fished high and static. So, your reporter, how did he get on?  After doing a tour of the lake he got his first fish at the point of the rookery and then noticed fish rising all the way down to port end bay, to Sams point and beyond. Fishing a sunburst FAB and two buzzers he landed 19 hard fighting rainbows. The final results were:

Thanks again to Paul for the report - Robin's fish is pictured below - it's a cracker!: 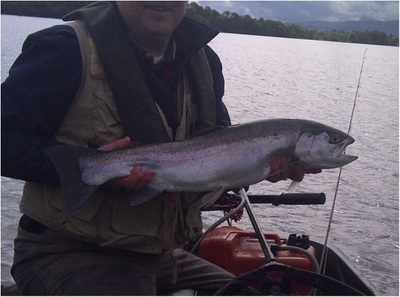 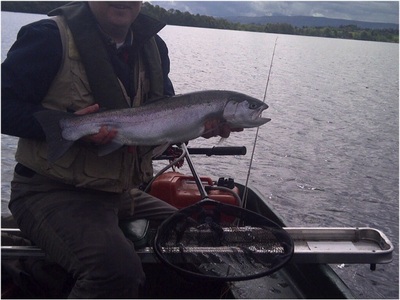 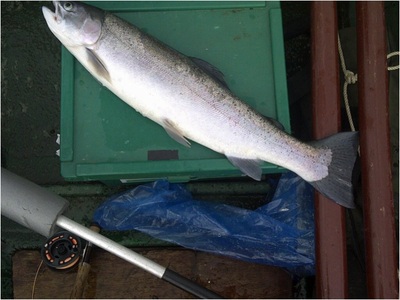 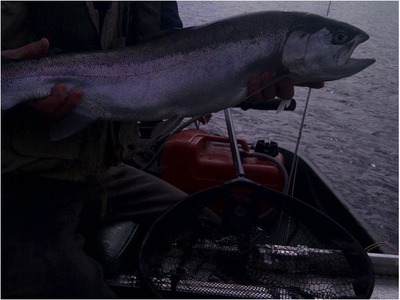 The B&B visited a new venue for the club, the Black Loch.  We had heard good reports that the loch was fishing well and some strong fish were being caught so don’t fish too light. We all arrived eventually and loaded the excellent boats (Coulam -  ex Anglian water boats) with all the gear and our electric motors and batteries. The facilities for older members and anyone who sometimes finds it difficult to access boats were excellent with a custom built ladder which holds the boat in place while alighting or departing (great idea).

We all set off for various parts of the loch all waiting for black loch expert LT to show us the way to the favoured drift. Unfortunately, or was it a ploy, Laurie’s petrol engine refused to start for a good 15 minutes so we headed off to the top of the wind with the intention of gradually fishing our way back to the lodge in the moderate east wind, which still had quite a chill in it. Laurie quickly caught us up when the engine started and promptly decided to anchor up just next to where your scribe, under the guidance of IG, had decided to start. Most rods seemed to be equipped with fairly slow sinking or intermediate lines with various lures, boobies and cormorants in evidence. Most of the boats anchored in the margins casting to the shelf to deeper water on the east and south east corner and in the west and south west cast up the shelf from deeper to shallow. How did we get on? Quite well for a first visit, the boats which stayed in the west and south west generally did better with reports of bagging up by lunch time. The boats who ventured east gave mixed reviews some reporting many good fish while others struggled.

At the weigh-in there were the stories of many a good fish returned, lost and being broken with the following results:

Congrats to all those in the points and thanks to Paul for the report. 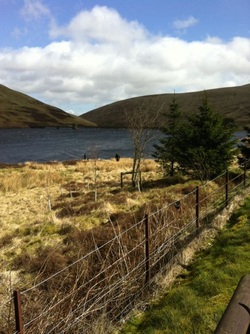 Willie heading out to do battle after lunch
Well, that was a bit of a blow.  Frandy was wild on Saturday, but your intrepid reporter and his borders sidekick braved the elements to bring you the latest from one of Scotland's wilder rainbow trout fisheries.  Even Ken was absent on Saturday with sore foot - get well soon, Ken.  As the B&B anglers gathered in the lodge, OK, hut, there was no real urgency shown to get out and fish.  Willie was feeling the cold - lack of jacket, I guess, and David arrived late, having been held up en-route by a large breakfast.  There were a few other (non B&B) eejits braving the elements, too, and they headed off down towards the dam, armed with yellow dancer hand grenades and wind-breaks.   Willie braved the wind and headed left to the big bay beyond the buoy left of the boats, but was held up by an extremely angry rainbow trout in the wee bay near the boats.  Undaunted, he knocked it on the head and continued his slow progress against the wind.  David meanwhile donned 6 windproof layers and had a go just down from the lodge.  The mirage cormorant did the trick after a wee while and a change to a fritz damsel thing encouraged another couple of trout to hang on, but not long enough to reach the net.  David then joined Willie in that big bay on the south shore and by the time the whisky called at lunchtime ,Willie had 4 in his bag and had returned 6, while David stood at 3 and 3.  An inquorate committee meeting over lunch declared that to be the final result, so Willie is awarded 10 points and David 9.  Any questions as to the validity of this result and its impact on the Club Championship should be written out in triplicate, signed, and posted '1st class signed for' in a self addressed envelope. 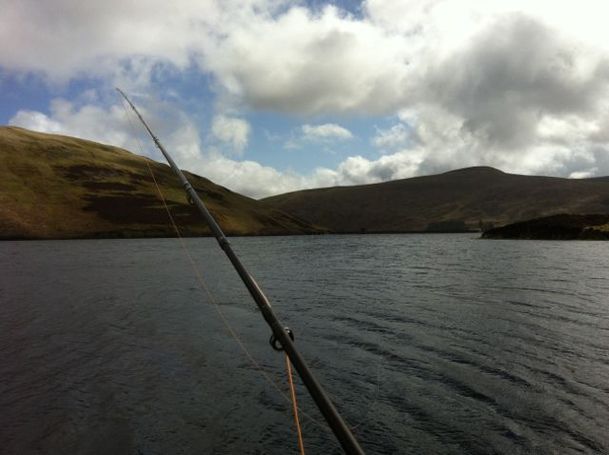 The view from the reel 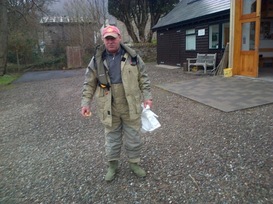 Boy, was it cold!

Here's our esteemed Hon Sec doing his pre-competition check that everyone has a Lake-style bass bag.  He narrowly missed the boats that left the beach early but they mysteriously avoided disqualification. :-)  John G was into fish early on, fishing along the reeds at Sam's point and we saw Tom with his rod bent, but it turned out to be a pike.  Elsewhere, Bill M, Robin and Barrie were accumulating fish and John G finished his limit at 11.45, allowing David to start!  A few of us gathered in the lodge at lunchtime and put the world to rights over a dram or 2, but all to soon we were back out to worry some more trout.  We heard about Bill's big fish (7lb+?) which had to be returned as Bill had his 5, and which is why it would be great if members carried a camera or a camera phone!  All pictures gratefully received - thanks Alastair for the ones you provided.

The results from the outing are as follows:

So, many congratulations to Bill and Robin, with last year's champion Paul in 3rd place.  18 rods caught 60 fish for a total of 143lb and 13 oz, for an average weight of around 2lb 5oz.  In addition to Bill's returned big fish, he also had at least 1 of 4lb plus, and there were similar tales reported by others.  David weighed in a fish of 5lb 13 oz, pictured below.  Please don't forget to enter the 'drive the boat' competition - see 'Archive' page. 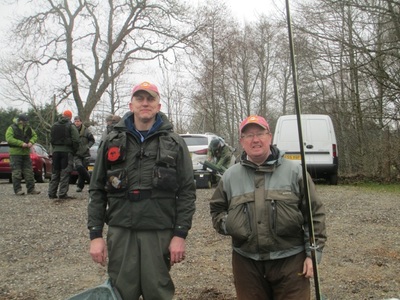 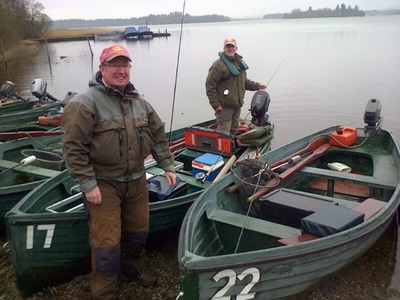 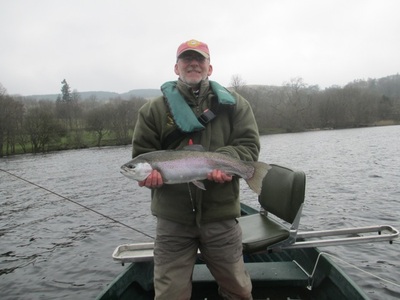